Five Famous Buckets You Must See Before You Die. 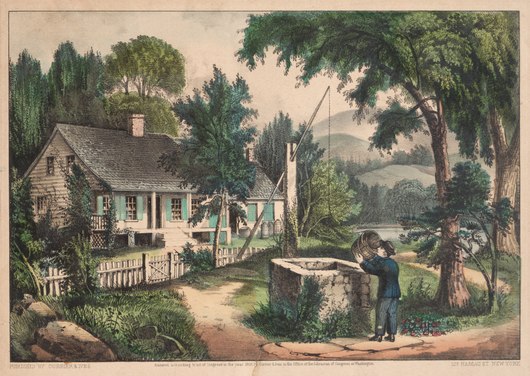 The Old Oaken Bucket, located at the Woodworth House in Scituate, Massachusetts, inspired the famous song by Samuel Woodworth——

The old oaken bucket, the iron-bound bucket,
The moss-covered bucket which hung in the well.

This remains one of the most famous songs ever written about a bucket.

The Devil’s Bucket, northeast of Dead Armadillo, Texas, is a hole in the ground, approximately twelve feet in diameter, whose shape gives it an uncanny resemblance to a large bucket.

King Ethelbeard’s Bucket, a large golden vessel encrusted with precious stones and elaborate Saxon filigree work, is used by Queen Elizabeth to water her petunias. It may be viewed by the public at Buckingham Palace every year on Bucket Day.

The Amazing Farmer’s Bucket Theme Park in Qianxinan Buyei, China, has as its centerpiece a three-hundred-foot-tall mechanical figure of a farmer carrying a bucket. Riders ascend an elevator to the shoulder and slide down the interior of the arm into the bucket, and the “farmer” dumps them on his “garden.”