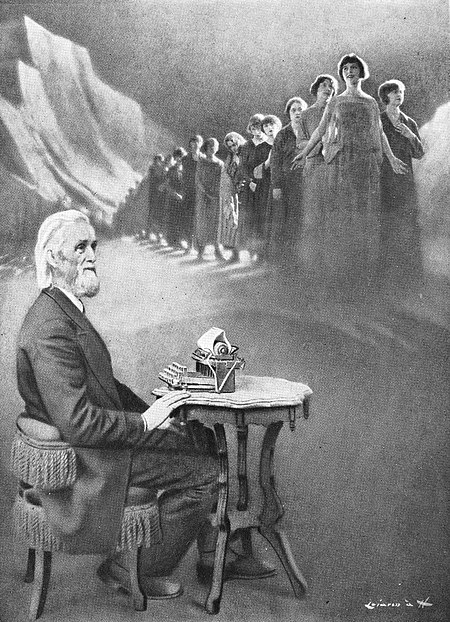 The picture is titled “Emancipation,” from a history of the typewriter published for the machine’s fiftieth anniversary in 1923. It depicts Christopher Sholes, inventor of the practical modern typewriter, with his invention in front of him, dreaming of the myriads of women who will one day be set free by his creation.

“I feel that I have done something for the women who have always had to work so hard. This will enable them more easily to earn a living.” —Statement of Christopher Latham Sholes, inventor of the typewriter.

Say what you like about the drudgery of the modern office: it is nothing like the drudgery of nineteenth-century factory work, which was the usual choice for a woman who had to earn a living before the typewriter came along and opened up a world of comparatively dignified clerical positions.

The movement that we know by the name of “feminism” is undoubtedly the most significant and important social evolution of our time. The aims and aspirations behind this great movement need not detain us. Suffice it is to say that, like all great social movements, its cause and its aim have been primarily economic. What is known as “sex-emancipation” might almost be translated to read “economic emancipation”; at any rate it could only be attained through one means, namely, equal economic opportunity, and such opportunity could never have been won by mere statute or enactment. Before the aims of “feminism” could be achieved it was necessary that women should find and make this opportunity, and they found it in the writing machine.

—Story of the Typewriter.

If anyone knows the name of the artist, Dr. Boli would be grateful to be enlightened. The half-tone reproduction in the book makes the signature illegible.