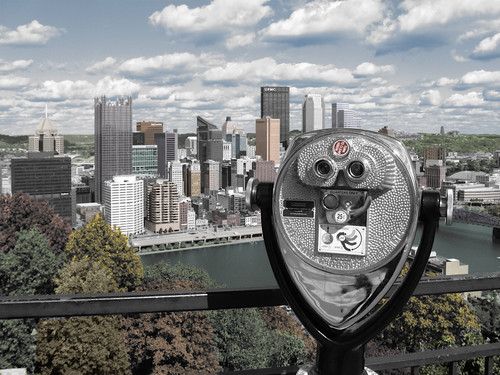 What would it look like if the world were in color?

A monochrome world has a stark beauty of its own, of course. But what if we could see colors as well as shades of grey? This is the world our old friend Father Pitt decided to visit for a little while in his newest and oddest art project. He has created a world of Imaginary Color, and has begun to populate it with pictures of the world rendered as if the world were in color. So far the collection is small, hosted on an experimental site on a free server; but it demonstrates the principle. In theory, any monochromatic picture could be rendered in colors through the same process.

What is the process? It begins with an ordinary monochromatic picture. Some of the pictures old Pa Pitt has used were taken on monochrome film, but the same results can be obtained by taking a color picture and throwing out the useless natural colors. Then each segment of the image is hand-tinted, until the appearance of a colored landscape is created.

Is there any good reason for doing this? We hope not. Both Dr. Boli and Father Pitt abide by the principle emphatically stated by Mr. Oscar Wilde: All art is quite useless.