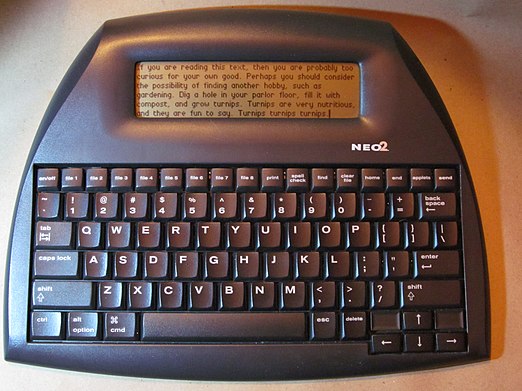 We end the month of Typewritertide with a device that is almost, but not quite, a typewriter.

This is the AlphaSmart Neo 2 (a name that suggests it ought to have succeeded a Paleo 2), the last in a line of AlphaSmart portable word processors. It has an LCD screen—not like your computer monitor, but like your pocket calculator—that can display up to six lines of text at a time. It has 512 kilobytes of memory, divided into eight “files.” It has a pretty good keyboard—better than the keyboards on most laptop computers, anyway.

There is only one thing this machine does well, and that is to type words. That is what it was designed for. Other features were added to this model in a desperate attempt to invade the educational market, but anything other than word processing is not worth attempting.

“Word processing” is a generous term for what this machine does. It does have a spelling checker, and if you remember using the spelling checkers on word processors in the 1980s, you will be familiar with the process. It has a find function. It can copy and paste. And it is very good at compiling statistics about your writing: word count, character count, sentence count, paragraph count, line count, page count.

But there is no formatting. You will search in vain for italics or bold or underlining or Comic Sans. You get words, and if you find words inadequate, then why are you trying to write in the first place?

The method of transferring those words to a computer is delightfully primitive. You plug the Neo 2 into a USB port, and the computer thinks it sees a keyboard. Open up a blank text document on the computer. Then, on the Neo2, you press a key marked “send,” and the machine starts typing. Now go make tea, because if you wrote anything substantial, it’s going to take a few minutes.

Now, why would you want one of these things instead of a laptop computer? Dr. Boli can think of several reasons. First, it is very portable: it has a full and responsive keyboard, but the whole machine is smaller than almost any laptop. Second, it is a machine that simply writes, without connecting to the Internet and showing you pictures of cats. Third, it is ready to write, with the cursor where you last left it, after a two-second bootup. Fourth, it has astonishing battery life. The battery life is rated at 700 hours—on three AA batteries—and this does not seem to be an exaggeration. You could use this machine for ten hours a day for more than two months before having to put in fresh batteries. This is as close as an electronic device can get to the grid-independence of a mechanical typewriter.

And now Dr. Boli will tell you a secret that suddenly turns the Neo 2 into a very capable word processor. The secret is Markdown code. Markdown is designed to be read by people who don’t know they’re reading code, so it’s dead simple to learn. It uses all ordinary ASCII characters. Write in Markdown on the Neo 2, and you can have italics, bold, block quotes, six levels of headings, and even automatically numbered and properly placed footnotes. Open a Markdown editor on your computer, plug in the Neo 2, and watch the text magically format itself as it comes in.

The Neo 2 has not been made for several years now, but enough of them were sold to unsuspecting educational institutions that the machines are still fairly plentiful. They can be had in good condition for about $50.

In fact the company may have given up too soon. A much more elegant but much less capable device is now being sold faster than the things can be made: the Freewrite, billed as a “smart typewriter.” The Freewrite has a very nice e-ink screen, the best keyboard money can buy, and wireless to synchronize your words with online storage. But its editing capabilities are limited to a backspace key. This is a deliberate design choice, meant to enforce the writing-class dogma of separating writing from editing by making editing impossible. Dr. Boli believes that such dogmas are promoted by professional writers, who know better, to keep down the competition.

At any rate, the fact that Freewrite is selling $600 units faster than the factory can turn them out shows that there is a large market for a machine dedicated simply to writing. A mechanical typewriter still does that job better than almost anything else, and the prices of manual typewriters are being driven upward by the many young writers who are adopting them.

Obviously there is room for some enterprising manufacturer to make a good typewriter. There is in fact a factory in China making manual typewriters, and the glorious old Royal typewriter company is selling the things in attractive Art Deco shells. But these are too cheap; they have a reputation for poor quality control. The manufacturer has the wrong market in its sights. We now know that writers will pay $600 for a good writing machine. Convince them that your typewriter works properly out of the box, produces well-aligned text, and will last for years, and they will pay those $600 to you.

Meanwhile, at a tenth of that price or less, this Neo 2 is a good compromise for people who want the convenience of a typewriter, but not the funny looks from patrons at the next table in the coffeehouse.