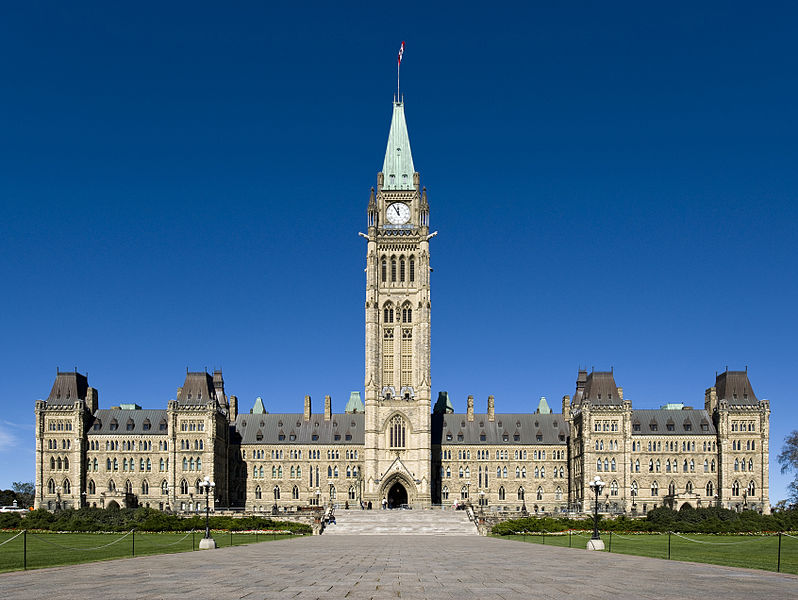 Canada is a federation consisting of nine provinces, three territories, and Quebec, which is an alternate universe in which Montcalm defeated Wolfe. The form of government is a parliamentary democracy, which lasts exactly as long as Queen Elizabeth is in an indulgent mood.

The Head of State is the Queen of Canada, Elizabeth II. She is also Head of State of each of the individual provinces, so she has quite a bit of state-heading to do. Of course, Elizabeth is also Queen of a large number of other countries, which spreads her a bit thin. Canada is actually the largest of her dominions, but we must remember that most of Canada is useless. Approximately 87.2% of the population lives within a hundred miles of the U. S. border; the rest of the country is populated mostly by moose.

The Queen is represented in Canada by a Governor General, whose job is to open sessions of parliament and make sure the Queen gets the hats people send her.

Because Canada is not within easy commuting distance of her house, Queen Elizabeth tends not to pay very much attention to it, which allows Canadian politicians to play at running the country uninterrupted for years at a time. Every once in a while, the Queen notices Canada and squashes its parliament with her parliament-squashing mallet. Then the whole government has to be started over from scratch.

Until recently, the Canadian government was elected by the people to represent their interests. In common with other capitalist democracies, however, Canada has moved to a system in which the government is elected by large corporations to protect themselves from the people.

Visitors to Canada are encouraged to enjoy Canadian government as a spectator sport, but discouraged from participating directly.