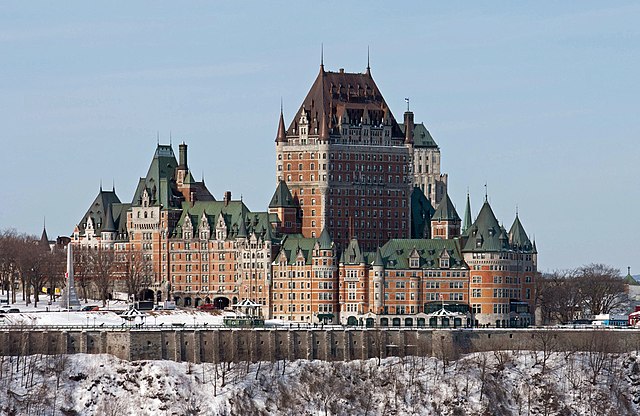 Part 8.—What to See in Quebec.

Quebec is not exactly like anything else in the world. It is not exactly a province; where other Canadian provinces have provincial parliaments, Quebec has an Assemblée nationale, a National Assembly. Yet it is not exactly a nation, since it is part of the federation of Canada. Yet it is not exactly part of the federation of Canada, since it has never accepted large parts of the Canadian constitution, which it regards as foisted on Quebec against its will; and, furthermore, under the doctrine Gérin-Lajoie, Quebec asserts the right to make treaties with foreign powers independently of the rest of Canada. Yet its citizens, in referenda, have repeatedly rejected attempts to separate Quebec from the Canadian confederation. It is therefore probably safest to describe Quebec as a state of mind.

Since so much of the politics of Quebec involves stamping out English in public and paranoid ranting about the various threats to la Francophonie posed by encroaching Anglophonism, the U. S. tourist will probably assume that the Québécois would be universally hostile to Americans who cannot speak French, and will spend months honing his conversational-French skills before heading for Montreal. And then he will find it impossible to use them. Every Francophone Québécois will instantly recognize him as a tourist from south of the border and insist on speaking to him in perfect English. In every shop, restaurant, hotel, subway entrance, gas station, or tourist attraction, he will attempt to start a conversation in French, only to have it instantly diverted to English by the smiling and polite Québécois. One suspects it is some sort of national joke.

Montreal is the great metropolis of Quebec, and the greatest French-speaking city outside Metropolitan France. It is also the only Francophone city in the world with an American baseball team, so it is really the only place to go if you have always cherished a secret fantasy of shouting at an umpire in French. It has subways and commuter trains and crowds and appalling traffic and everything else you want from a great metropolis. If you wish you could visit Paris but can’t stand the sight of the Eiffel Tower, Montreal is the place for you. La Ville Souterraine, the Underground City, is the world’s largest underground complex, which makes it the perfect destination for a tourist who wishes to visit an entire city without setting foot in the grubby outdoors. Indeed, Montreal is perhaps the only city in North America made of equal parts old-world charm and dystopian science fiction.

Quebec, the provincial capital, is the only European walled city in North America north of Mexico; it looks a bit like the cover art for an alternate-history fantasy novel. The Citadelle, a star fort in the middle of the city, is officially a residence of the Queen of Canada, but no one ever sees her taking out the trash, and rumor has it that she may not live there at all.

The Hôtel de Glace is a hotel made of ice outside Quebec City. Every winter it is painstakingly rebuilt over the frozen corpses of last year’s guests.

Saguenay is the home of the Ha! Ha! Pyramid (Pyramide des Ha! Ha!), a jolly and whimsical memorial to the most destructive flood in Canadian history.

The rest of Quebec is made of tundra and French-speaking moose and mosquitoes big enough to be mistaken for musk oxen. About 5% of Quebec is civilized; the rest tends to show up on maps with engravings of dragons instead of railroads and highways.

Tourists who drive should note that stop signs in Quebec usually say “ARRÊT.” That is especially confusing to drivers from France, where stop signs say “STOP.”