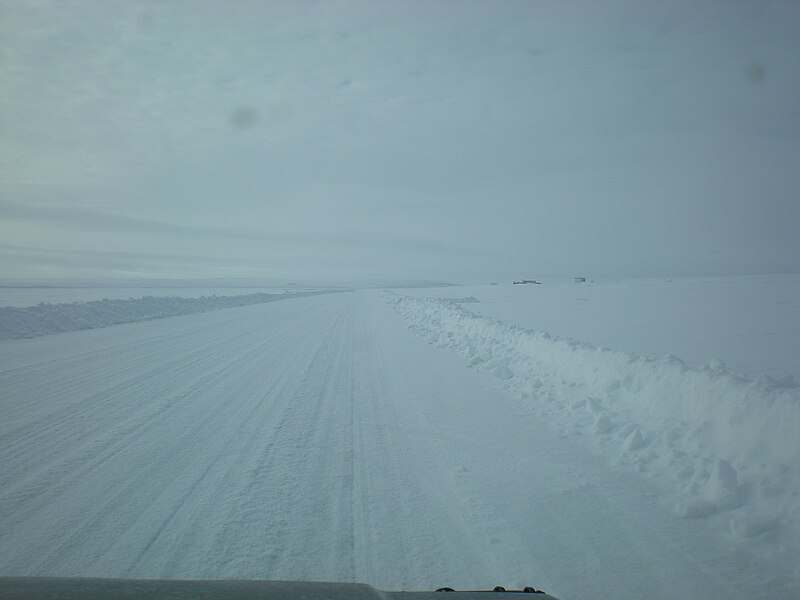 Part of this picture is land, part sky, and part road. As an amusing parlor game, ask your guests to identify which is which.

Part 12.—What to See in the Territories.

Far to the north, many miles from the populous safety zone huddled along the United States border, are three Canadian territories notable for the outstanding natural scenery that is assumed to exist in them by people who have never been there. Almost all this vast land, and a great deal more besides, formerly belonged to the Hudson’s Bay Company, making it the single largest piece of territory ever governed by a department-store chain. The company transferred the land to the Canadian federation in 1870, and since then has steadfastly refused to take it back.

The Yukon has a population roughly equal to that of the municipality of Bethel Park, Pennsylvania. Its main industry is providing settings for silent-movie dramas about the Yukon Gold Rush. Since the silent-film industry has been in a bit of a slump lately, the Yukon is not as prosperous as its convenient location and bracing climate might lead one to expect.

Whitehorse, the capital, is now the largest city in the Canadian North. With a population nearly as large as that of East Peoria, Illinois (Dr. Boli does intend to keep making these population comparisons throughout the article, in case you were wondering), Whitehorse is well on its way to becoming a generic Canadian city with a Tim Hortons on every corner—proof, if any were needed, that the territories are capable of advanced civilization.

Dawson City was the great gold-rush boomtown of 1898, and is now maintained as a perfect movie-studio backlot setting for gold-rush dramas. Strict regulations require all new construction to be in the same rickety boomtown style, creating full employment in the construction industry, since builders know that any building they put up will fall down again in six months. Citizens of Dawson are required to participate in at least one colorful saloon fight each week, which successfully keeps the population low in spite of the boom in the construction industry.

The Northwest Territories very narrowly escaped being called “Bob” when the eastern parts were split off to become Nunavut (see below). The great rubber-suited monster Conventionality, however, rose up out of Ottawa and made sure the residents of the territory were not allowed to amuse themselves.

With a population roughly equivalent to that of Findlay, Ohio, this is the most populous of the territories. The capital, Yellowknife (population roughly equivalent to that of Norton, Massachusetts), is the largest city in the world named for a rusty weapon, having recently exceeded the population of Crumbling Bent Iron Pipe, Montana. It is the cultural hub of the Canadian North, having a large and well-appointed high-school auditorium for concerts, bake sales, etc.

Polar bears are one of the leading attractions in the Northwest Territories. In order to see the bears at close hand, tourists are advised to dress in sealskin coats completely covering their bodies and lie horizontally near a hole in the ice.

Nunavut is an area the size of western Europe with the population of Parkersburg, West Virginia. It was created to settle land claims made by the aboriginal population. “We’ll give you a place with plenty of elbow-room,” the federal government said. “And you won’t believe how much waterfront property!” Thus the long era of cheats and deceptions perpetrated by European settlers against aboriginal Americans finally came to an end.

Water, most of it in solid form, is one of the leading features of Nunavut. This gives much of the landscape a certain pleasing minimalist uniformity, as if it were designed by Robert Rauschenberg in his monochromatic period. The capital, Iqaluit, is a thriving urban center known for its museums celebrating the culture of the region, most notably the Museum of Frozen Explorers, in which some of the most distinguished visitors to Baffin Island are exhibited in astonishingly lifelike three-dimensional displays.